Disclaimer: This post demonstrates the use of 1+cM when comparing specific groups of people in order to see patterns of multiple descent from a few ancestors.  It should not be used to validate connections with matches, particularly in this example where connections are beyond a genealogical time frame reaching at least up to 500 years.

To those who are not familiar with Polynesian origins and/or are new to reading my blog, I will recap.  The ancestors of Polynesians originated from the Melanesia area and thrived there for thousands of years. Thousands of years later a group of “Austronesians” originating from Southeast Asia moved into the area, intermingled briefly and continued to move into western Polynesia where Polynesian culture was born.  At least a couple of thousand of years would pass before they would continue to expand further eastward.  As Polynesians moved from west to east, their genome became less diverse due to repeated founder’s effects and bottle necking.

With the default at 5+cM I did not see anything unusual other than ordinary small segment matches.  But when I reduced the setting down to 1+cM (above), you can see a lot of tiny segments resembling a comb.  The slightly bigger gaps are just the missing teeth of a comb.  Some of these patterns begin to appear at 3+cM, although most do not appear until you reduce it down to 1+cM.  In my mother’s example above I show only chromosomes 1 – 20 since there were no segments that looked like a comb on the other chromosomes.

Then I looked at a Maori woman’s results (below) and compared hers to other Maoris and one Hawaiian.  She also shows the missing teeth at 1+cM, but only in a few areas.  Some areas have the comb pattern while other areas seem random.  The random segments could be IBS (Identical by State) or IBD (Identical by Descent).  Polynesians lack genetic diversity, particularly eastern Polynesians more than western Polynesians, so the random looking segments could be both IBS and IBD segments.

Then I looked at two Tongan men and compared them to other Tongans and Samoans.  With Tongans & Samoans there seem to be more randomness.  A few of the tiniest segments may be close to each other, but nothing resembling too much like my mother’s results, a definite comb-pattern.  Take the purple and green colors for example for this one Tongan man below.  Notice how on some chromosomes they seem to be closer together while on others it just looks random.  Again, these are only using the bare minimum 1+cM.

The other Tongan example. 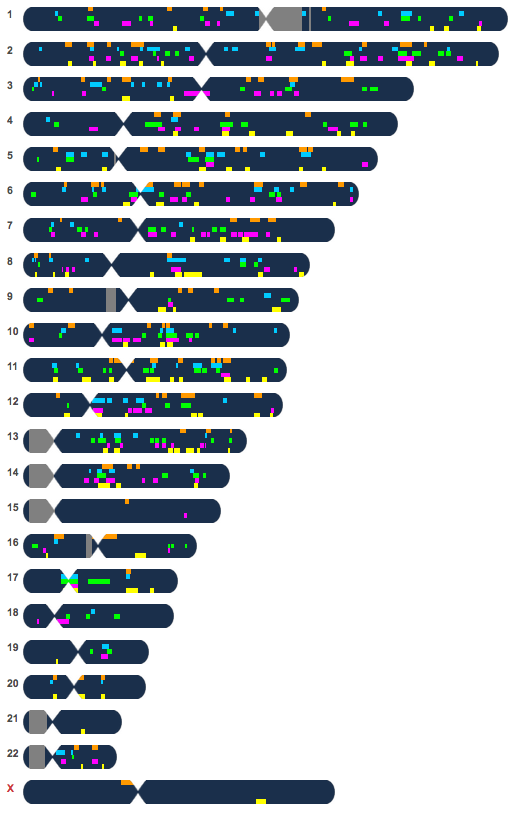 As you can see, it is hard to look for patterns that resembles a comb, and instead you see random colors all over the chromosomes.  What was interesting to see was how little X these Tongans had.  Unlike with the Maoris and Hawaiians, many of them shared multiple segments with each other.

But what does all of this mean?  These are very small island populations.  They have had repeated emigration from these small islands that resulted in a series of founder’s population.  There there was also bottle necking that occurred a few times.  All of these combined would leave only a few closely related ancestors to populate and repopulate new areas every time.

So the multiple, very small segments that represents a comb with missing teeth is the result of people descending from just a few ancestors who contributed that particular segment, but was inherited from multiple lines going back to the same ancestor over and over again.

Below is an image where I compare my mother with two Samoans (yellow & green) and three Tongans (orange, blue & purple).  There seems to be more randomness, however, there are a few of those comb patterns.

Notice how the X chromosome is much more full, unlike what we saw when comparing the western Polynesians (Tongans & Samoans) among themselves. The yellow color belongs to a Samoan woman. The fact that women have 2 X chromosomes may be the reason why there is a long match versus using two Tongan men whose matches included two women in their examples above.  But these are Polynesians, so you would expect more of a match on the X.  My observance of matches for the past 2 years was limited to only my mother being compared to others, which means I have seen a lot of X matches for her, and the same for myself and my brother.

From what I am noticing so far is that these patterns look like what is mentioned in research papers about Polynesian genome and the loss of heterozygosity going from west to east.  The last place in Polynesia to be settled was in the east, ending at the extreme points of the Polynesian triangle, namely Rapa Nui (Easter Island) in the south east, Aotearoa (New Zealand) to the south west, and the Hawaiian islands in the north.  This explains why my mother and the Maori woman have less random looking tiny segments compared to the Tongans and Samoans.  And if we compare western and eastern Polynesians to each other, we may see some randomness but not as much as we would see with western Polynesians alone.  Other types of Polynesians getting DNA tested would help to exhibit any other additional patterns that I cannot currently see with the majority of Hawaiians and Maoris getting tested.