In my earlier blog posts I have mentioned how significant the largest segment size is when determining a true 2nd to 3rd cousin relationship.  Polynesians can have a total shared amount that can easily exceed 100cM.   These totals tend to over-estimate the predicted relationships.

From the ISOGG Wiki’s page, you can see that the average for 2nd cousins once removed (2C1R) is 106cM while 2nd cousins are averaging around 212.50cM. 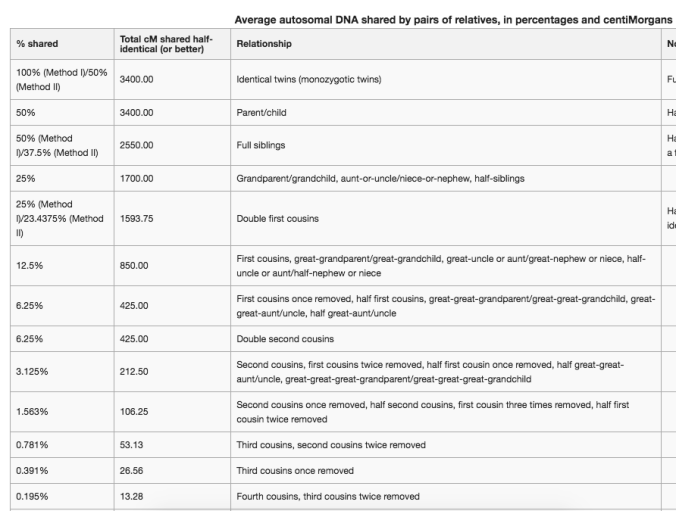 A quick look at the type of numbers just by looking at my own ONE TO MANY from GEDmatch.com.

My cousin Allen who is a 2C1R to me (his maternal grandmother & my mother are 1st cousins) has a large segment of 35.9cM.  You can see more comparisons of the largest segment for 2nd to 3rd cousins from Blaine’s Shared cM Project but I also have been keeping my own numbers from my known relatives.

Only one of those 2nd cousins shared a large segment of 21.8cM, pretty small, and then it gets even lower as you go more distant.  But normally 2nd cousins will share a rather large segment, which is why more than 20cM has always been advocated and also among the Ashkenazi Jewish community.  In fact, I thought they used 25cM, but I could be wrong.  I even mentioned 30cM would be good.

But is it a requirement?  Absolutely not.  However, if you cannot find a connection, or the same geographical origin i.e. New Zealand or Hawaii, then that would be a strong indicator that you are not as closely related as it was predicted.

I have been noticing how I do have a few Hawaiians whose largest segment is more than 30cM but have not been able to find a connection.  I also notice that these matches will not have the same geographical origins as I do.  So could it be that these large segments remain in our population for many generations?

Here’s an example of how it actually has remained for centuries by comparing my Hawaiian mother and a Maori.

Here is the largest segment sized match with a couple of Hawaiians from MyHeritage.

37.2cM and 33.6cM.  They have pretty good trees but their ancestry goes back to totally different islands from my own ancestors.  And I saw in their trees the origins of the different islands is further back while the more recent ones were born in Honolulu where some of my more recent ancestors were born.  I did trace many of my ancestors’ descendants who remained in Honolulu but none are those connect to these matches.

Here is a Maori match from MyHeritage.

Notice that the largest segment is 34.2cM.  The highest I’ve seen with a Maori.  How can a large segment last that long after many centuries?

And while the focus here is utilizing the largest segment to get a more accurately find a true 2nd to 3rd cousin match, we know how in one generation a large segment can quickly be reduced.

Comparing with the largest segment that my mother shares with her 1/2 3C.  This is how they connect.  I outlined in yellow all testees in this particular comparison.

The largest segment that my mother & her 1/2 3C share is 49.6cM (FTDNA indicated 52cM) according to GEDmatch.  But that particular segment was not inherited entirely by my mother’s sister and seemed to have been broken up thanks to recombination and turned into a 10.7cM and a 25.1cM segment.

My mother’s deceased brother seemed to have received that same segment or maybe even slightly larger.  And while he is not alive to test, his son did, and he shares 50.2cM with this 1/2 3C of our parents, or our 1/2 3C1R.

My younger brother got nearly the entire segment as my mother got it but I got a very small portion of it, just 14.3cM.  That’s a huge difference from 49cM.  Had my mother nor my younger brother got tested, I would not have been able to find this good match and would have concentrated on matches with large segments more than 20cM or even 30cM.  My older brother got DNA tested however he does not share any of this same matching segment.  In fact, he shares 0cM on this particular chromosome.

This 1/2 3C was key in finding my mother’s biological parents.  At the time I did not know how we were related but I did concentrate on this match because of the large segment size.

So how do we really filter all of these matches?  By solely concentrating on the largest segment?  You should definitely not spend too much time on large segments that are less than 20cM and whose shared total is way over 200cM.  With those particular matches, if you compare trees and notice no common geographic area, that would be a big indicator that it is a distant match.

Remember that with a 2nd cousin you would share a pair of great-grandparents.  With a 3rd cousin you would share a pair of 2x great-grandparents.  By that generation or even a generation further back or two if you find that you do not share the same geographic location, then the match is a distant match.  The same applies for large segments greater than 30cM.  If no common geographic location, then it is probably a distant match.

10 thoughts on “Largest Segment – Is it the best way to gauge the closeness of relationship?”